Obama, Israel and the Genesis Prediction...

Finally, there is a fifth reason tens of millions of Americans, many conservative commentators, support Israel and worry about America if American support for Israel wanes.

To the left in America and around the world, this reason is dangerous nonsense. But for a vast number of America's Christians, many Jews and even many non-religious conservatives, it is deeper than any military or political reason. The reason is based on a verse in Genesis in which God, referring to the Jewish people, says to Abraham: "I will bless those who bless you and curse those who curse you."

One need not be a Jew or Christian or even believe in God to appreciate that this verse is as accurate a prediction of the future as humanity has ever been given by the ancient world. The Jewish people have suffered longer and more horribly than any other living people. But they are still around. Their historic enemies are all gone. Those who cursed the Jews were indeed cursed.

And those who blessed the Jews were indeed blessed. The most blessed country for more than 200 years has been the United States. It has also been the most blessed place Jews have ever lived in. Is this a coincidence? Many of us think not.

Those who curse the Jews today seem to be cursed. The most benighted civilization today is the Arab world. One could make a plausible case that the Arab world's preoccupation with Jew-hatred and destroying Israel is decisive in keeping the Arab world from progressing. The day the Arab world makes peace with the existence of the tiny Jewish state in its midst, the Arab world will begin its ascent.

The converse is what worries tens of millions of Americans: The day America begins to abandon Israel, America will begin its descent.
Posted by Race Bannon at 7:20 PM 3 comments:

If you get your news from the TV or the Radio, or a Newspaper, you would think the following about the Financial Reform bill:

- Democrats want to create a government solution, to lessen the damage caused by risky actions taken by rich bankers and Wall Streeters, so that the Average American (..."the taxpayer") doesn't lose their savings (investments, retirements). We should learn from the 'risky, greedy' actions that caused the current financial crisis, and make the system safer for the little guy, and not let the rich get richer.

- Republicans want a pure, free market. Survival of the financially fittest. Let the rich get richer, and let the trickling down begin. Get rid of government restrictions.

Here is my simple explanation of a complex problem, and what is going to happen:

(first you have to understand risk vs. return)

Banks and financial institutions were freed from some regulation in the 90's. Congress then created rules that encouraged them to take on risky investments (mortgage backed securities, etc.) and used governmental and quasi-governmental organizations (Fannie Mae, Freddie Mac, etc.) to provide 'insurance' to the banks and institutions, so as to hedge the risk.

As problems occurred in one sector of the economy (real estate), it all started to fall like dominoes. Democrats AND Republicans decided that to stop it from getting worse, the government would bailout these banks and companies. (It's okay for Ford or GM, or Merrill Lynch to go away, but it is not okay for thousands of Average Americans to lose their savings invested in Ford, GM or Merrill Lynch, or so they thought).

Now, certain Democrats are proposing what is essentially a system by which large banks, companies, etc., that are close to failure from poor management or risky investments, will be automatically taken over and bailed out. We will be assured that rich Wall Street guys won't walk away with the huge salaries and bonuses, while the Average American loses his life's savings.

Problem #1: The 'system' starts with another huge 'account' funded by taking fees from proceeds from the banks, investment corporations, etc. But oops, oh yah, the banks get the money from lots of Average Americans, so the banks don't really pay, we do. Also, I'm wondering, will this account be held in a lock box, like Social Security?

Problem #2: If banks, investment corporations, etc., know they will be bailed out, they will be willing to take on more risk. (It didn't deter anybody at AIG, Lehman, or now Goldman Sachs to get huge payouts, knowing that the company was probably going down). So we will have institutionalized the very mechanisms that caused the problem we are trying to solve.

In my opinion, just like they do with the tax system, they are trying to help the Average American, by making the banks, investment corporations, and top wealth earners pay. But we all know that the banks and corporations will make a profit, or they won't exist. The Average American will be charged. And the top wealth earners will find away around it, that is how they got where they are.

Whether you think the system needs fixing or not, you have got to see that more government is not the solution... 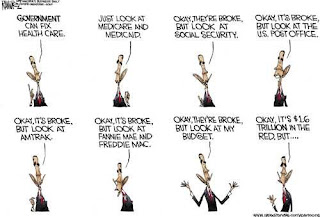 Where should you get your news? Al Gore's Information Superhighway. Read an article. This article has nine links to nine other articles, comments, or sources. As you come across a referenced topic that you don't know about, or you want to confirm (Dan Rather) you can click on it. If there is something in the article you don't understand or know about, highlight it, copy it, go to the google machine, paste it, voila.

Can you imagine, watching Hardball with Chris Matthews as he makes some statement, you click on him, and get to hear an opposing opinion...

It's the First one!

The First Amendment to the Constitution...

Congress shall make no law respecting an establishment of religion, or
prohibiting the free exercise thereof; or abridging the freedom of speech, or of
the press; or the right of the people peaceably to assemble, and to petition the
Government for a redress of grievances.

We have seen the images of Nazis in America, marching in parades, saying disgusting things, and we have learned that as long as they do it peacefully, they can not be stopped. They are protected by the First Amendment.

Then why this? Obviously there are some missing details, but insulting somebody is not against the law. I assume the case hinges on whether or not people actually felt they were being forced to leave the store...and I doubt anybody believed that. And, "Bias Intimidation"? Folks, you can intimidate all you want, as long as you aren't biased against those you intimidate. It's kind of like hate crimes . . . "not only did he kill him...he hated him!"
Posted by Race Bannon at 6:51 AM 1 comment: