Don't Forget to Set Your Clocks Back...

The Only Thing We Have To Fear...

"Congress passed the Affordable Care Act to improve health insurance markets, not to destroy them. If at all possible, we must interpret the Act in a way that is consistent with the former, and avoids the latter."

…shall not be infringed. 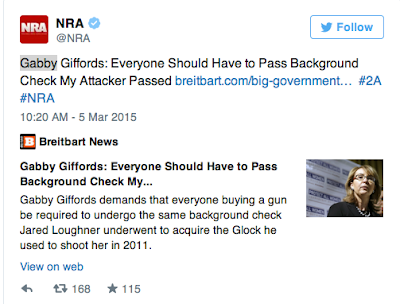 The individual who shot Giffords would have passed a background check.  His family failed him, and our society's ability to deal with the mentally ill failed him.  What stopped the shooting from being worse was the brave citizens standing nearby.  In some respect Arizona has reacted well to this incident, removing infringements on the right to bear arms, concealed or otherwise.

Never bring a knife to a gun fight.  Unless, the state infringes on the right to have guns, and then you are just in a knife fight.  Never go to a knife fight…

New Jersey law says that unless they will NOT be approved, gun purchase permits SHALL be issued within 30 days.  The Chief of Police quoted in the article claims it usually takes more than two months. Does he know that is against the law? (It sometimes takes three months, six months, etc, even for LAW ENFORCEMENT OFFICERS to purchase guns personally).

Solution?  Enforce the laws regarding prohibited possessors (i.e. already convicted felons) and have truth in sentencing (get sentenced to 4 years, actually serve 4 years) for the use of a gun during a crime.  In New Jersey - the criminals know very well that there is little risk in criminals possessing guns...

He was arrested, but what amount of time will her serve?  He has two prior robbery convictions and one weapons conviction.  He was in possession of another gun four months after being released from prison.  A gun stolen out of Virginia.  No background check required for that.  What should be the penalty for him on his fourth strike?

Awesome! That they do the right thing….and kill Matt Damon.
Posted by Race Bannon at 8:21 AM 2 comments:

Bring Your Child to Work Day was April 23rd this year.  Annually, it has not always been a convenient day for me, and most of the years I was not doing something I could bring a child to.  I borrowed a day in June a couple years ago and declared it my take your child to work day.  My oldest was getting ready to fly the coop, into the wild blue yonder, so I got permission to take him with me.  It was not an extraordinary work day, pretty routine, it was a "training" day.  Which was nice, gave him a chance to see what my work looks like a lot of the time. (I imagine professional football or baseball players have pretty good days at work…but on a different level, I do have one of the coolest jobs on the planet - as far as "jobs" go). Some co-workers even took time out of their day to spend with him too.  Just having him there, having him see what I do - just as he was leaving home to start doing what he does - made it one of the best days of my life.

As things go, it turned out to be the worst day of my life.  In some ways I have not really moved on from that day, and time seems to stand still.  You never really get enough father-son days, not at work, not at home.  A couple days ago my oldest described his day at "work." It was a "training day" for him too.  Maybe not the best day of his life, but a pretty good "work" day. I hope that some day, if he has a son, he gets to take him to work and have a day like I had.

The day after portions of the Patriot Act were allowed to expire:

You can read in the article that the FBI had two of these men, and a third, under 24 hour surveillance.  That they had recordings of their conversations.  That they knew they were communicating with ISIS via social media.

ISIS claimed they had people all over America.  So far, what the public knows is that American law enforcement is 2 for 2 on attacks by these evil doers.  Garland, Texas (which was really Phoenix, Arizona) and now Boston.  The FBI is also very successful recently at arresting people as they were trying to leave the country to join ISIS, here, here, and elsewhere.

The Boston story is getting a lot of good news, good in that the public can see that ISIS was not lying, and good that the FBI is all over it.  How many do they not know about?  What happens when a police officer is publicly killed an beheaded in America?  At least police officers are armed, but what about when a soldier is attacked in America?  It happened in Great Britain. (It actually happened at Fort Hood - but that still gets less attention then the Colorado movie shooting).

The Patriot Act is not perfect - few laws are.  But are we really giving up freedom when we pay a phone company to dial a phone number to call somebody and the government has access to those records? I'm not going to belabor the point - but there has always been a "reduced expectation of privacy" when a third party (the phone company) is involved, and once the majority of the American public understands that the government can obtain the records - can't we cede that to big brother?

The good news so far, is that the ISIS in America guys are idiots.  But what if they stopped talking on the phones, used anonymous and random social media to communicate, and launched a "coordinated attack" at what seemed like random locations around the country? They wouldn't have to be that successful to change our world.

Would you suspect these people as Islamic radicals if you saw them in public?

- I only posted the video to hear her say snow domes with all those extra syllables...
Posted by Race Bannon at 6:08 AM 2 comments: