I remember reading a story about Michael Behenna some time ago. I remember feeling pain, and thinking that it was yet another story about injustice awarded to a member of our military, or law enforcement (including CIA officers), for their action in fighting our current enemy.

I am not unbiased. I have chosen sides. I do not believe it should be a fair fight.

When you are in a fight for your life, when you are protecting your family, your family's freedom, it's future - you must fight to win.

I am not, nor have I ever been, a member of the United States military. However, I have held them in awe ever since I was a child. I had a great childhood. The best! In my house, we had the Internet decades before it was formalized. We called it the Wold Book Encyclopedia. I used to spend hours reading about the Army, Navy, Air Force and Marines, and looking at the pictures.

After 9/11, a lot of things changed. I have blogged about this before...initially, the talk around Washington was that we were going to take the gloves off. We were going to stop treating terrorism as an issue for law enforcement, and start fighting the war that they had been fighting against us. We were also going to un-handcuff our National Security officials, and let them fight too.

Sometimes I think we are losing the fight.

That brings me back to Lieutenant Michael Behenna. He is one of those who joined the military after 9/11. He knew exactly what he was signing up for, exactly what the consequences may be. Or did he?

READ ABOUT HIS STORY HERE. Interesting note - that my father pointed out to me - Michael's mother is an Assistant United States Attorney, and Michael's father is an employee of the Federal Bureau of Investigation, the world's premier Law Enforcement Agency.

Now, that is his side of the story. In my job (seeking Justice), I must remain objective. The Lieutenant broke some rules, which ultimately led to the other man's death.

I also believe strongly in the idea of 'the totality of the circumstances.' We can not make judgements without looking through this lens. With all things considered, Michael Behenna is a United States Army Ranger...and the other man was an Al-Qaeda fighter, who had been involved in the death of American soldiers.

What decides who wins a war and who loses? Are we going to vanquish completely the jihadists and haters of freedom? Is that our goal? What are we asking our soldiers to do?

Michael Behenna needs to be freed.

**Please go back and look at the website for things you can do. In the least, he receives letters and they matter to him. I learned this Christmas, that even a short, stay-at-home housewife, with ten kids and a propensity for melodramatics...can make a huge difference.
(I didn't use inappropriate capitalization, or superfluous exclamation points, so you know it is ALL IMPORTANT!!!!!)
Posted by Race Bannon at 9:34 AM 5 comments: 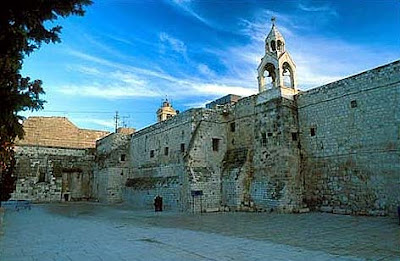 And it came to pass in those days, that there went out a decree from Caesar Augustus, that all the world should be taxed. (And this taxing was first made when Cyre'ni-us was governor of Syria.) And all went to be taxed, every one into his own city. And Joseph also went up from Galilee, out of the city of Nazareth, into Judea, unto the city of David, which is called Bethlehem, (because he was of the house and lineage of David,) to be taxed with Mary his espoused wife, being great with child. And so it was, that, while they were there, the days were accomplished that she should be delivered. And she brought forth her firstborn son, and wrapped him in swaddling clothes, and laid him in a manger; because there was no room for them in the inn.

And there were in the same country shepherds abiding in the field, keeping watch over their flock by night. And, lo, the angel of the Lord came upon them, and the glory of the Lord shone round about them; and they were sore afraid. And the angel said unto them, Fear not: for, behold, I bring you good tidings of great joy, which shall be to all people. For unto you is born this day in the city of David a Saviour, which is Christ the Lord. And this shall be a sign unto you; Ye shall find the babe wrapped in swaddling clothes, lying in a manger. And suddenly there was with the angel a multitude of the heavenly host praising God, and saying, Glory to God in the highest, and on earth peace, good will toward men.

And it came to pass, as the angels were gone away from them into heaven, the shepherds said one to another, Let us now go even unto Bethlehem, and see this thing which is come to pass, which the Lord hath made known unto us. And they came with haste, and found Mary and Joseph, and the babe lying in a manger. And when they had seen it, they made known abroad the saying which was told them concerning this child. And all they that heard it wondered at those things which were told them by the shepherds. But Mary kept all these things, and pondered them in her heart. And the shepherds returned, glorifying and praising God for all the things that they had heard and seen, as it was told unto them.
Posted by Race Bannon at 2:45 PM 12 comments:

The Associated Press is reporting that Homeland Security Secretary Janet Napolitano made her 'first' comments on Friday about the death of Border Patrol Agent Brian Terry...which occurred on Tuesday, three days earlier.

...I'm not accusing Napolitano of being heartless, or of not caring about Terry. Maybe she communicated immediately with his co-workers or family - only they know. I am however, wondering why the former Governor of Arizona, who used to complain that the Federal Government was not doing enough on her border - isn't on TV on Tuesday focusing the nation's attention on what is going on down there.

I know, you laughed at that.

The Border Patrol was doing what it should be doing - the agents are well armed, well equipped. But why does the reaction of Bernie Madoff's wife to her son's suicide get more press than Terry's death?

We hear about the approximately 30,000 deaths (recently) in Mexico due to the drug cartels, the dozens of city Mayors killed...car bombs...beheadings...

The Border is not secure. 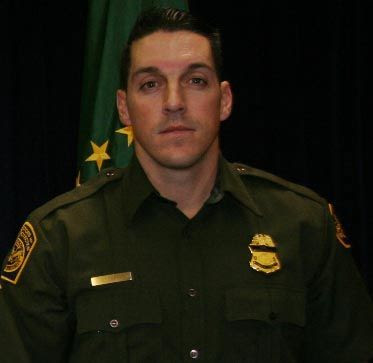 Terry's older sister, Michelle Terry-Balogh, 42, told The Associated Press that her brother’s dream was to be a federal agent, and that he loved his job. “It was his life,” she said. “He said it was very dangerous, but he loved what he did and wanted to make a difference.”
Posted by Race Bannon at 8:48 AM 1 comment:

...in my never-ending fight for Justice, I bring you the ultimate Justice. Saving a life.

Most people who read this blog, already know, but just in case... 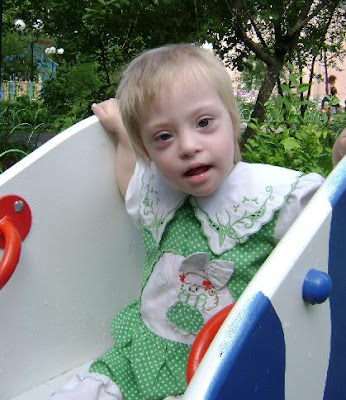 This is Olga. Olga is almost 5 years old. She is in an orphanage in Europe. When she turns 5, she will be sent to an 'institution.' European socialism has determined that at that age, because she is has an extra chromosome she is a drag on society. I don't know all the details, but we all know that is where the devil is.

There is A BLOG that is trying to raise money to help get Olga adopted in time. When it started, Olga had maybe a couple hundred dollars in her 'account.' As of this writing, she is up to $11,297. She WILL be adopted. There are families trying, but they need more help.

Please go to the blog, read the links, and donate what you can. If you donate any amount, and post comments you are entered to win an IPad. If you blog about it, Facebook, Tweet, Twit, whatever, you can comment again, and be entered again.

It is not a company, or organization, it is a stay-at-home-mom with a bunch of kids of her own, raising money to save a life that others are trying to discard...and she has an IPad to give away.
Posted by Race Bannon at 3:39 PM 5 comments:

For those who argue that the only people crossing the border are hard working people just looking for work...

...each time there is an incident, a Sheriff's Deputy shot at, a rancher killed, a DEA Agent killed, bodies found - each time I think, 'this will bring attention, this will bring change.' But all we get is more of the same from DC.

Then I remember how much the world changed after 9/11, and how our border security is as bad as ever. Nothing changed.
Posted by Race Bannon at 5:43 PM 5 comments:

"...just who the hell do you think you people are? You are very, very dangerous people indeed..."