Am I Missing Something...

The Russian's hacked the election. They "hacked" into the Democratic National Committee's computers. And they got...one guy's emails.

Am I missing something?

The leaders of the NSA and the FBI testified - the Russians successfully hacked us. And got one guy's emails.

The head of Homeland Security also said the Russians also are believed to be behind hacking attempts in approximately 21 states, wherein companies involved in electronic voting devises were targeted. But, no emails were stolen.

I was asked this when it happened. My answer was that Comey was too soft. Comey wants people to know what he is thinking and feeling, so that his honorable and ethically sound principles are there for everybody to see. But how then did he get everybody so mad by publicly announcing the findings in the Clinton Private email Server investigation, and get Trump so mad by NOT saying publicly that Trump was not a "target" of the Russian Collusion investigation?

Read This: Why Trump Fired Comey by Andrew McCarthy

Summary: Comey got into the political pool, and then did not understand that he can not swim, and it was too deep for a guy only 6'8".

"Comey maintains, as he did in the July 2016 Clinton-e-mails press conference, that there is a “public interest” exception to the Justice Department rule against commenting on investigations. But public interest is the very reason for the no-comment rule. The point is to avoid smearing people who have not been charged with a crime. Such a smear happens only if the public is interested in the case."

It is not Reality Winner, it is reality, loser. The Director of the FBI, whom Trump challenged to clean up the leakers...was a leaker.

But more on that later...

First, I want to know - what is it that the Russians are exactly accused of doing? Hacking? Colluding?  It is pretty much common knowledge that the Russians have attempted to interfere in American elections and politics, and that they are currently attempting to, and they will in the future continue to do so. But what is it the "hacking" and "colluding" that these investigative committees are looking for?

Comey all but explained it. "Spear phishing," he said. Which is to say, they targeted specific people with fake emails. Not the Nigerian Prince emails, but some designed to look official. A dupe opens up an attachment on the emails, and a computer can be "infected."  This is alleged to have happened.

But what is the evidence? What was the results? Are we to believe that the DNC was 'hacked' - and all they got was John Podesta's emails? That was the hack? One guys emails? Not strategy files. Not Wasserman-Shultz's emails (thank God). Not party donor lists? One guys emails? A foreign government, the stinking Russians, hacked the Democrat Party in the year of a Presidential election...and got one guys emails?


And what of the "colluding?" To do what? What exactly would the colluding, or evidence of it, look like? The Russians helped the Trump campaign...what? You can not fill in the blank because it does not make sense. What does make sense - is that the Democrats (media) want to talk about it over, and over, and over again, without any evidence, or without even saying what it is that they are looking for? I get it - unexplained money in accounts, meetings in secret - but to what end? They met, or paid money - for what? Somehow that would effect the election?

I've been busy. Blogging has taken a backseat to everything. I guess a lot has been happening in the real world too.

Today former FBI Director James Comey will testify before a committee of Senators. Yesterday, President Trump named his nominee to replace Comey. Another lawyer from the Department of Justice.

That underlies two of the problems with James Comey.

He honestly told the story of Hillary Clinton so that he could be transparent with the American People. That could have been done in a written report of the facts, and the facts supported a charge of multiple violations of the law. Comey revealed to the public that he could not think of a "reasonable prosecutor" that would bring charges - because he could not match it with a historical prosecution. That was simply due to the fact that what she did was unprecedented. Obviously, many prosecutors came forward after his press conference and said they would have prosecuted. Either way - the fact was the the Director made himself the center of it all, and that is a bad thing.

Oh, back to two problems with Comey...

One, his discomfort with Trump was a weakness. I can hear him now in an email to agents, "...I just felt deep inside that the American people would best be served if I just supervised the FBI and let blind Lady Justice deal her cards..." We, the American people, should not know how he feels, or what scares him. Which leads to Two, the Director of the FBI should report directly to the President. There are things the FBI does that do not involve the Attorney General, or the Director of National Intelligence.

But you will never hear that in today's world run by lawyers. I have met a lawyer or two who I thought had a mind for investigations, and could drive them. But it takes and investigator to understand investigations, the process and the people who conduct them. A lawyer could do a good job at the helm of the FBI, but why skip all the great lawmen and hire another bureaucrat lawyer?

Who would I nominate? There were a couple of former agents in the running - not sure if they would have been good. I want Joe Friday. Just the facts, cut the feelings, thoughts, emotions and get the job done.

Give Me Free Markets, Or Give Me Death... 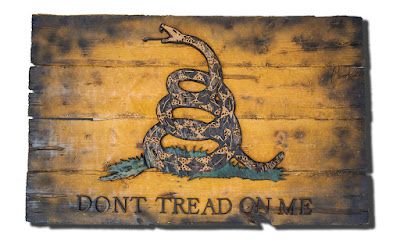 The terms "Fascist" and "Fascism" get thrown around a lot, especially when Republicans are elected. Like most complex topics, or ones involving history, the terms are misunderstood and misused by most people.

The person most closely associated with Fascism is Benito Mussolini, who said, "We have buried the putrid corpse of liberty."

[ I was aware of how Mussolini died (see Mummer Gaddafi for modern reference), but I was unaware how many photos exist of his mutilated body. Thanks Internet. ]

Mussolini is also credited with saying (before his head was caved in), "The definition of Fascism is the marriage of corporate and state."  Sounds like a Cable TV company to me?

Why People Hate Capitalism by Kevin Williamson, National Review
Posted by Race Bannon at 8:07 AM 3 comments: