…finger prints, DNA, what exactly does the press think the FBI is looking for in the Hillary Clinton emails?

I think the press, and a large percentage of the public, is looking for an email like this:

Syd,
Once you sell the weapons to the opposition in uh, that country west of Egypt, make sure to get them to those guys we talked about at the uh, 'undraiser-fay. Ya know, the uh, 'ebels-ray in -yria-say.

Toodles,Hills
PS Tell Bill I said "hey" at the foundation dinner next week.


In all these debates, interviews, etc., not a single reporter is smart enough to ask follow up questions (maybe they ask, and it is edited out, or she moves on - I'll give them that) when she makes a useless coverup statement regarding her use of personal email?  She has often remarked that previous Secretaries of State had used personal email accounts - ignoring that they did not do that exclusively, and not for classified material.  She has also never accounted for her direction to Department employees the consequences of using personal email accounts for official business.

But - the biggest dance has been when she has, over and over again, said that the emails were not "marked" classified.  This has been shown to the public, and the press, as pointless - as the State Department email system is what adds the classifications.  Gmail does not have a drop-down menu to add SECRET or other markings.  The email system used by the State Department is stand-alone - NOT connected to the Internet. One could manually type the classifications on a regular email system - but that would be an obvious breach of the law.  Obvious to some.

In a previous email Hillary was exposed telling an advisor to just send the information anyway, since it was available to the public in a different form.  The advisor replied that he did not have access to the secure email server - so he did not even have the information.  So if it was in the public, he could have just found it on the Internet and copy/paste.

Now, in the latest email dump, Hillary TELLS AN ADVISOR TO REMOVE THE CLASSIFIED MARKINGS.  Let me repeat that. Hillary wrote, "...turn into nonpaper no identifying heading and send nonsecure."  Identifying heading is the heading that identifies the classification of the document.  Game. Set. Match.  She can not claim that she does not understand when she is instructing a subordinate to send information on a nonsecure setting, without the classification that it has been given. 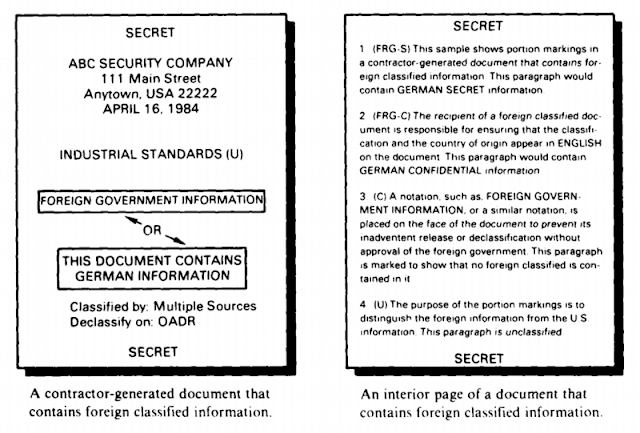 By the way, two notes - FBI agents are regularly reminded that if they view classified material such as on Wikileaks, it is still classified, and they may not view it - and the FBI agents that are investigating this matter, are reminded that their mandatory annual Classification Marking training is to be completed by June 30, 2016.
Posted by Race Bannon at 6:55 AM 2 comments: