...during the 2008 presidential campaign, I remember hearing about a person fainting at an Obama rally, and how while Obama was in the middle of his speech, he stopped and addressed it, because he saw it. That day, I heard on the radio that it was not the first such incident. IT HAPPENED 16 TIMES.

Not that a person fainted at 16 different Obama rallies. That Obama stopped mid-sentence, acknowledged that a person 'may have fainted,' asked to get them water, asked for medical assistance, give the person room, give them some air, and then said that they would be alright. EACH TIME, get that - ALL SIXTEEN times, each one of those things happened.

As Medved pointed out, now during the trick, he says "she'll be okay," before medical assistance can be given. How does he know they didn't have a stroke, or are in diabetic shock?

(For those of you that are fans, this is a classic Buckaroo Banzai move. See this move on Penny Priddy in the club scene...I couldn't find the end of the scene? But its basically the Obama schtick).

This is the President of the United States. It may turn out that this is just a nervous tick, and since he is such a great orator (teleprompter), his 'ticks' are full episodes. But, I think he is starting to believe that he is untouchable.
Posted by Race Bannon at 7:47 PM 2 comments: 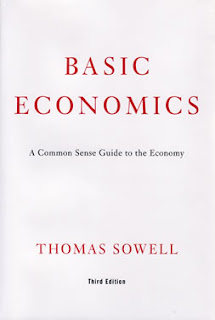 In 1994, I graduated from college with a Bachelors of Science degree in Finance from the College of Business at Arizona State University. Last week I read Basic Economics by Thomas Sowell. I should have just read the book and saved the tuition.

The subtitle of this third edition of the book is, “A Common Sense Guide to the Economy.” The book provides a foundation for understanding the reasons why things happen in the economy. It explains why the money in your wallet has nothing to do with the gold stored at Fort Knox. It also explains why a person might choose not to spend money on a brand new backpack, when alternative use (slightly used, in need of repair) backpacks exist…in the closet. And you don’t need a college degree to understand or enjoy it.

Thomas Sowell, like Ronald Reagan and countless other conservatives (Sowell considers himself more of a libertarian, as do many ‘conservatives’), was a person of the left earlier in his life, and even considered himself a Marxist, before the experiences of life, of reality, changed his way of thinking. Sowell’s work follows that of Milton Friedman. Friedman’s economic theories provide the basis for conservative economic policies for governments around the world. Friedman represents the right side of economics, while John Maynard Keynes represents the wrong, er, left side of economics. Friedman was a supporter of Keynes…until he saw the liberal ideas at work, prolonging the Great Depression.

Sowell, Friedman, and all economists today, stand on the shoulders of Adam Smith, the “Father of Modern Economics.” Smith wrote The Wealth of Nations, the first and greatest modern book of economics, which separated economic theory as its own study, and explained the value of the “free market.” It was first published in 1776. Smith wrote of free markets before there was a United States of America, the largest, longest lasting home of free markets.

Here is an article written by Sowell that gives you a taste of the book.

Taxes. Republicans want to limit the taxes on the highest earners. “Tax cuts for the rich.” How does reducing the taxes on a person who makes $500,000 a year, help fund governmental programs designed to help the poor? The answer is in the book. Read the book.

Minimum wage. Good thing right? Why do Republicans fight minimum wage laws? Do they want people to work for $1 an hour? How does passing a law to raise the lowest wages in society - reduce the highest wages? Read the book.

America does not manufacture anything anymore! Go to a shoe store. The shoes, the boxes the shoes are in, everything is made somewhere else. America has lost all its manufacturing to foreign countries, and become a service centered economy. So, we have become a nation of hotels and restaurants! But…who is staying in those hotels, and eating in those restaurants? Rich Chinese and Ecuadorian factory workers? Read the book.

Illegal immigrants. They come here secretly, get a job under a false name, collect a paycheck, and send the money back to their country of origin. Legal immigrants do this too! With millions of immigrants coming here to work, and sending part of their paychecks to other countries, they are damaging our economy, stealing our wealth! How can they increase our prosperity as a nation by doing this? Read the book. (I admit that was a hard one for me).

One reviewer wrote, “Voters by the millions want to know basic economics, not for passing tests but for grading politicians, and for understanding how the world works. They do not need the equations, graphs, and jargon of textbooks, but the guts of the basic issues.”

Okay, my college degree has helped me out along the way. But Basic Economics taught me that one lifetime payment of $26.95, is much more valuable than $5,000 a semester for four years.
Posted by Race Bannon at 6:50 AM No comments:

...I created this blog to separate family stuff from, well, my personal biased opinions on political-historical-sports-adventure stuff. I see and hear things every day that interest me, and I sit down at the Google-machine and want to blog about them. However, I think there should be a place to look at pictures of the kids with peanut butter and jelly on their faces after lunch, and not have to read about politicians, current events in law enforcement, or my latest workout.

The blog title and layout were kind of spur-of-the-moment, and I reserve the right to change them at anytime. I do like to fly by the seat of my pants, but mostly because flying while standing is much harder.

I also made the blog available to the general public, and so I will blog in semi-anonymity ...

A word about Race Bannon -

Roger T. "Race" Bannon is a Special Agent/Bodyguard/Pilot who has mastered the martial arts, all manner of firearms, and expert driving. Years ago, on Saturday mornings, you could watch him in action as he battled evil wherever he found it to the percussion-heavy big band jazz of the 1960s. Now, he blogs.