Brought to you by...

...Clorox Bleach.  This post is dedicated to my nieces:

So, Dad dies, uh, before he was a Dad.  So, uh, Mom uses stored genetic material to have baby.  I'm okay with that, I don't necessarily support it, but (and I love to quote him) Oscar Goldman said, "We have the technology."

Now Mom wants Social Security survivor benefits.  Social Security has many components, and one of the original was OASDI (Old Age Survivors and Disability Insurance).  If Dad paid in, and Dad died, his survivors get benefits.  The Supreme Court recently ruled that in these 'technology' cases, the State will decide (hurrah for State's rights!). 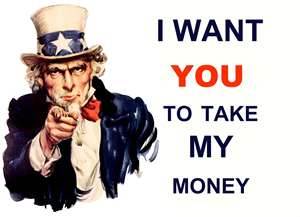 Here is the real problem:

If Dad were not FORCED to pay into this fund, then after he died, Mom would already have his money.  Why is the government forcing us to pay into this ponzi scheme, spending our money on other programs, and then not paying what us the money was intended for?

At first glance, I wanted to say, "Sure lady, raise your baby on the government dime...", but I was wrong.

I cut and pasted the article title, with its typo, to make a point about our counrty's lack of etidrs...
Posted by Race Bannon at 7:48 AM 1 comment: 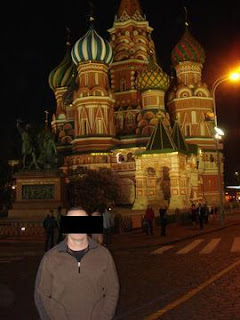 I flew commercial, and gave up my aisle seat to a mother who wanted to sit with her (spoiled, bratty) kids.  I ended up in a 9 hour flight wedged between two large, rude, smelly, Russian women.  My suits didn't make the flight...but the folks at the US Embassy translated and expedited, and my bag arrived a few days later.

The above photo was taken the first night, it was amazing being in Red Square.  I'll post more about it later, but I was amazed that all the beautiful buildings in Moscow, including Saint Basil's (constructed in the 1500's) behind me, are churches.  Red Square, and the Kremlin, are full of churches.  Confiscated, hidden and denied during communism's reign.

Russia is a country struggling with itself.  There is capitalism everywhere - we have definitely won the Cold War. But it will take years to recover from almost a century of evil - and I'm not sure they will.

Vladimir Putin just won re-election with 63.6% of the vote (that looks legit, doesnt' it?) yet he travels with relatively little security. The President of Kazakhstan ("elected" with 95.5% of the vote) had more security.  Putin and his entourage passed right by me, in the lobby of my hotel, and I didn't get a second look.  Oh, and I was armed.  And since I don't wear the Euro-tight-suit, it should have been obvious to the trained eye.  Putin fears nothing.

...Oh, and the man-purse is huge in Europe - along with tight-suits and pointy shoes...and a small black coffee from Starbucks is about $7.00.

Although I am considered (by myself) to be an International Man of Mystery (IMM)...I don't actually like to leave the United States of America.  I find that America (and the rule of law) is like a warm blanket on a cool Saturday morning, why not just stay in bed ten minutes longer?  Well, my ten minutes is up.

I have actually never left the country on my own dime (and this time is no different).  As there are places in my own country I have yet to visit, I don't see the point.  I am not against OCONUS travel, I simply choose not to.  Oh, and I hate to fly, and there is no bacon on planes.

There are reasons for Americans to travel the world.  I recently read David McCullough's John Adams. Great book, great man.  The risks he took to create the world I live in, were amazing, and traveling across the ocean, and across Europe, were among them.

Yesterday, we learned that the CIA thwarted another plot to blow up an airliner inbound to the United States.  It really isn't 'another' plot, it is the same one, ever since (or before) the Bojinka Plot, they have endeavoured.  The FBI is now working to confirm that the bomb, was yet another, designed or built direclty by Ibrahim Hassan al-Asiri.  Luckily, Americans outside our borders once again protected our lives and our freedoms.

I will be gone for a while, outside of my warm blanket, and away from a computer that I can post, blog, or browse freely from.  Luckily, I will be traveling with some friends.  But unfortunately, my work has nothing to do with thwarting plots, or tracking down bad guys...but I will be able to punch my IMM card again.

Maybe, if you're lucky, I will pick you up something from the ash heap of history...

До скорой встречи!
Posted by Race Bannon at 8:21 AM 5 comments:

It's the Economy, Stupid

I, for one, believe Congress is more responsible for what happens with the economy (see Clinton v Gingrich), however, Presidents like to take credit, so lets give them the blame too.

Unemployment was low for most of the 8 years preceding the President, with historical lows.  Bush's second term ended with an extremely sharp increase to 7.2%.  The President can not be blamed for what he inherited, but unemployment has been setting all kinds of records, such as number of months (38) above 8%, and the average unemployment length of +40 weeks.  That is what you will get when you pay unemployment benefits for up to 99 weeks. 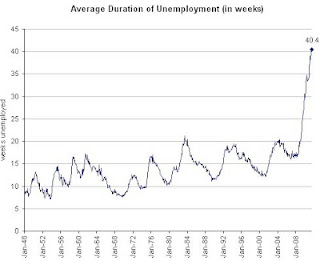 
Overall, I would not let the President move forward...but wait, I DO NOT WANT HIM TO REPEAT, so let's just all agree, he can join the Club of Former Presidents, and 'move on'...
Posted by Race Bannon at 8:41 AM 2 comments: