In Their Own Words...

Please sir, hit that campaign trail. Please, GOP, use their own words against them...

I do not have a lot of time to post, but I still read, and I can cut and paste...

"The attacks spurred by this ideology, like those carried out this weekend, are international terrorist attacks, regardless of whether the operatives who execute them are affiliated with or inspired by a designated international terrorist organization. There are no “homegrown” attacks because the ideology is alien. There are no “lone wolves” because the wolves are part of a huge pack — a fundamentalist Islamic anti-Western movement that has millions of adherents, some percentage of which will always be willing to take up arms and kill for the cause.

Pro-American Muslims need us to help them discredit the fundamentalists. We cannot do this without openly acknowledging — as, for example, Egyptian president Abdel Fattah al-Sisi has courageously done — that the roots of jihadist aggression are Muslim scriptures. This must not be obscured by political correctness. The scriptures in question must be acknowledged and reinterpreted in a manner that confines them to their historic context and nullifies a literal interpretation of them in modern life..." 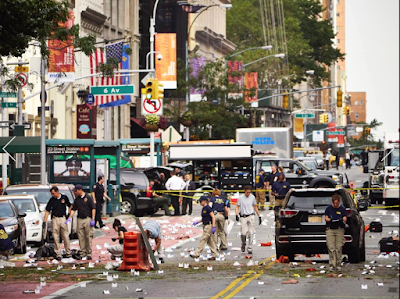 We were lucky that this terrorist living in New Jersey was a hapless loser. If he would have practiced more, trained better, we could have dozens dead. The police officers that responded to the call when the terrorist was found, were shot in the chest and through the windshield of a patrol car before they returned fire...striking the terrorist in the leg.

As the terrorist living in St Cloud, Minnesota showed, all it takes is a knife - to terrorize the lives of many. Imagine a dozen knife attacks in American malls on Black Friday.

Many police officers receive VERY LITTLE training with their firearms, and most of it is static target shooting on a flat range. Luckily for the rest of the people at the mall, that is not the case with a growing number of citizens.

The actions of the African Muslim immigrant who stabbed those people for being Americans will forever change the way those people look at malls, Africans, Muslims, etc. Most of the rest of us will forget about it soon...
Posted by Race Bannon at 9:26 AM 3 comments:


This could be the start of something wonderful...