Social Security For Whom...

Have you ever done your own taxes using $50 software?  It is amazingly simple and fast.  As you enter in (or download directly) your W-2s, 1099s, etc, it calculates what you owe, or your refund:


One thing I do during the year, is manipulate the numbers to "plan" for next year.  Such as, in some states, you can donate directly to a school, up to a certain amount - and it will DIRECTLY reduce your State Tax burden.  Or, I can juggle my investments, or see what happens if I purchase that rental property.


...or...what if I claim child dependents that I do not ACTUALLY have using fraudulent or stolen Social Security numbers.  That one is HUGE! Since the "Additional Child Tax Credit" is a tax CREDIT - not a deduction, it comes directly off your tax bill...or gives you cash.

When you see that you owe, or even if you would just like a couple extra thousand dollars - try adding a fake child.  Or, borrow a child of a person who does not file.  In the inner cities, where there are little no fathers in the home, and little to no income - there are plenty of Social Security numbers out there "earning" nothing!

As people are learning from Obamacare - the government is not invested in the efficiency of a program (they should have learned this from the MVD), just the existence of a program.  Our beautiful Internal Revenue system was designed to collect taxes.  However, it has been bastardized (one of my favorite words) by politicians ON BOTH SIDES and is used to direct behavior.  It is like Adam Smith's Invisible Hand made visible...only with warts, and cuts, and dirty fingernails.

I benefit from the current system, as I own property, I have many children, and I donate to charity (but only so much that it helps me...as I have, many, many children...who eat a lot, play sports, and do not clean their rooms! But I digress...).

In the current system, you can fill out your taxes using the software (or manually on paper, but I do not think that is as prevalent) and get your return before the IRS can figure out that your numbers are NOT legit.  Then, say, if you are an illegal alien, or just a neighborhood criminal, they can not find you - AND IN MOST CASES THEY DO NOT EVEN TRY - because the IRS can barely handle all the cases of $250,000 or more, they can not come after the $3,000 fraud cases, even if there are tens of thousands of them.

Want to try it?  Don't worry, some politicians think this is okay...
Posted by Race Bannon at 1:00 PM 3 comments:

They Are Who We Thought They Were...

Am I Missing Something...

After September 11, 2001, the "Department of Homeland Security" was started.

...Because Republicans were largely in control at the time, instead of getting an entirely new agency, they reorganized Immigrations and Customs and told them not to work on either immigrations, or customs, and they are now called "Homeland Security Investigations" - in my experience, they mostly work local drug cases.  Oh, and they gave them a HUGE budget increase.  They nationalized airport security guards, calling them TSA and giving them pensions.

...because a hurricane could attack the "Homeland", they added FEMA and disaster relief?

Then they added the US Coast Guard and Secret Service.

Who would you put in charge of all this?  I'm not going to say one was better than the other, but George Bush nominated Governors - people who had been CEOs.  Why?  Well, George Bush was a Governor, and the massive bureaucracy they were creating needed a CEO.  Then Bush nominated Michael Chertoff...a lawyer.  Barack Obama had Janet Napalitano - he was a lawyer too.  Now, he has nominated Jeh Johnson to be the Director of Homeland Security for the United States.

With that background, he is the obvious choice for DIRECTOR OF HOMELAND SECURITY.
Posted by Race Bannon at 6:56 AM 2 comments:

...what you can put off until tomorrow. 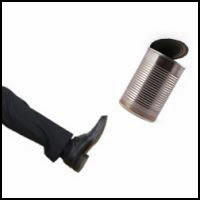 Oh well, it will be nice to get a paycheck again.  I better save it for next years medical premiums.

The More He Speaks...

"If I owned the Washington Redskins, I would consider changing the name...now, if you'll excuse me, I have to join the Congressional Black Caucus and address the National Association for the Advancement of Colored People as they discuss awards for the United Negro College Fund....what?...no, that's different..." 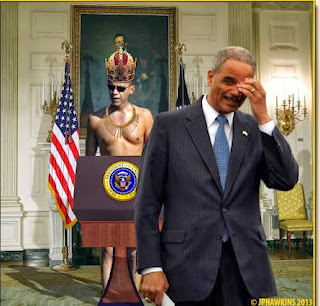 They don't want to have a "conversation" - they just want to talk.  Does anybody notice that he has no clothes on?

The Federal Government is shut down! 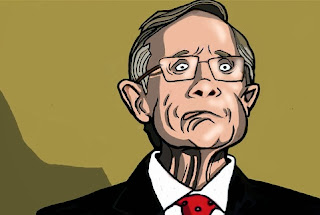 Congress already passed a law to "back pay" those employees after the shutdown is "resolved" (yes, surreal, they are at least supposed to pretend they may not get paid, and pass this later...)

So, they will still get paid...for not working. 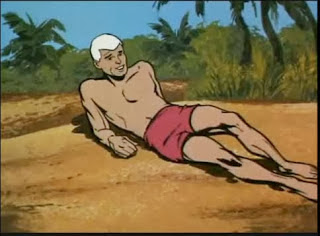 So...what about these "excepted" employees that are still at work.  Like the Capitol Police and Secret Service who were working when the lady rammed the barriers at the White House and the Capitol Building?  As well as just about every other Federal Law Enforcement Officer, Attorney, etc...

They are working, so they are getting paid, right?

No.  They are working...but not getting paid. 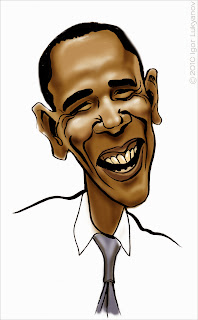 
The Federal Government is a big bloated Brobdingnagian behemoth that needs to be brought down to size.  The United States Senate has failed to pass the budget passed by the House of Representatives...for several years.  The resulting law, proposed by the White House, was referred to as the "sequestration" - which was an "across the board" cut.  The current "Shutdown" is the result of yet another year in which the Senate will not pass the House's budget, and they can't reconcile, AND they can't agree on a "Continuing Resolution" to keep spending "level" until they pass a budget.  Why?  Because "level" is not "level" when certain programs have to increase by law, and others are "exempted."

"All Bills for raising Revenue shall originate in the House of Representatives; but the Senate may propose or concur with amendments as on other Bills."

The House of Representatives passed a spending bill that funded the entire US Government, except for provisions of Obamacare, the Senate refused to pass it.  Who "shut down" the government? 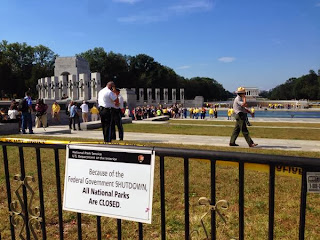 It is extremely disheartening to me to hear and read all the griping IN THE PRESS regarding the government shutdown.  Immediately the "news" outlets try to show the most public examples, such as National Parks, Museums and such.  And, depending on the outlet, the story will include somebody accusing only one side of causing it.  The one side, will always be, the Republicans.  The Republicans can not win.  Not even within their own Party.

The President, and Harry Reid, have openly said that they will not negotiate. Nobody seems to listen to them.  As Rush Limbaugh pointed out, if you went into a football game and you knew the referees were going to call the game your way, there is no disincentive to not cheat.  The Democrats know the media is on their side, so they know they can say whatever they want.  They will not be held responsible.  (Is Neal Cavuto a liberal?  Is Neal Cavuto part of the main stream media?  I don't think so, yet HE is one of many Right leaning commentators who push the line that the Republicans will be blamed, so why not cave in.)


What is missing from MOST of the stories is...that the Federal Government is broke.  Democrats and Republicans alike admit they can not agree on a budget that would be on a path to balance even within ten years. 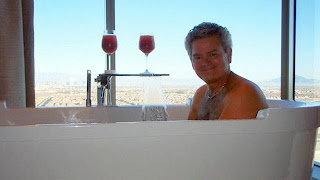 With stories of IRS officials, EPA officials, GSA officials getting caught spending hundreds of thousands of dollars on themselves, and the Social Security Administration and other Welfare Programs spending millions on advertising...is there any wonder who WAS NOT caught?


I know people who work for the Federal Government.  I can tell you, that from the lowliest of positions, to the upper echelons, the "workers" are dealing with this.  They are complaining, and they are PRIMARILY worried about their own paycheck, as they should, but they are dealing.  Even "excepted" employees, who are not furloughed, are being told that they may not get a paycheck in two weeks.  Sorry guys, while your valid arguments regarding the impact of sequestration are heard, there is a price to pay.

When people see the barricades being put up at the World War II memorial, and find out the Air Force vs Navy football game may not be played...do they ever consider this is the price we must pay?

As it turns out, the World War II memorial is an "open air" memorial...so...it is still there to be visited.  The Government can not afford a gift shop, or a Park Ranger who does nothing anyway.  The United States Naval Academy football program is funded by itself - no taxpayer money (Air Force, West Point - time to learn).

The people want to end the shutdown.  Not by balancing the budget.  Not by compromising.  Just end it, any way possible.

So.  My position on the Government Shutdown.  I have said many times.  Bring...it...on.  I applaud the Republicans, and for now, I salute them.  The House of Representatives has the purse strings - and they are trying.  They are submitting partial budgets to fund the "necessary" elements of the Federal Government.  But Harry Reid, the President, and the Democrats say "No, send us a full budget, full of what we want, or no deal."  That is not a "deal."

However.  Even this - will not even begin to solve our problems.  Unless the shutdown goes on long enough that people begin to see that life goes on, and the less Federal Government the better.

But that will not happen. 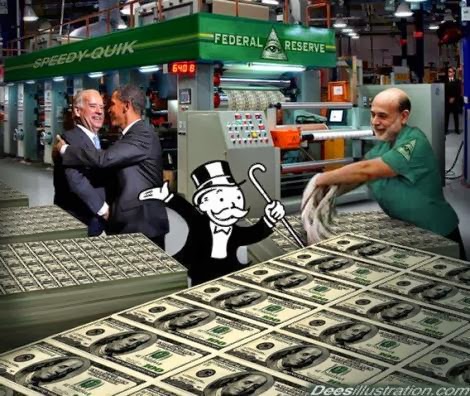 They Are Lining Up...

The President, and MANY Democrats were touting the success of Obamacare yesterday noting that the  glitches in the Internet system were due to heavy traffic of "people lining up" to sign up.  On the new version of CNN's Crossfire, Senator Debbie Stabenow was instructing Senator Tom Coburn (...a medical doctor) on how Internet usage and the number of people attempting to sign up showed how great it was...

When millions are forced out of their healthcare plans, and are required by force of law to purchase something, isn't it amazing and wonderful when they line up!

In the 1930s, the bread was so good and yummy, people lined up in their best Sunday dress:

It is all part of the plan:

It has been the plan all along...