"While President Obama may not be Wall Street's ideal candidate, stock prices are rising on growing expectations he will be re-elected this November."

How can you argue with that? Thank you CNBC.  The first thing most people think about when they think of Obama winning (which CNBC is sure will happen after months of headlines like this), is "I'd like to invest in this economy!"
Posted by Race Bannon at 2:34 PM 2 comments:

﻿ ﻿
I am currently reading a book based on behavioral economics, or what makes people make the decisions they make. So far, I like the book. There is clear empirical evidence of what the author describes as our predictable irrationality in decision making. However, I am at a part in the book where the author has opened the door for a necessity of government intervention, based on ‘failures’ of the free market. Predictably, I am now skeptical…but we’ll see how it ends.

The book questions tenants of traditional economics, price theory, and supply and demand. I question anybody that thinks government action in prices is a good thing. For all our faults, biases, etc., consumers WILL choose what's best for them, and if not...they were at least free to choose.

What’s wrong with that? It appears as if the investment in the house worked like the American consumer expects it to. So, why am I unhappy with the 29% increase in the investment in the house? Most homeowners don’t have $220,000 for the initial outlay, so the ‘modest’ gain of $64,000 was leveraged by the bank, and really cost the homeowner the down payment, closing costs, fees and interest. While the bank did not realize any of the $64,000, it got the down payment, some of the closing costs, fees and all of the interest - which in the first 10 years, is most of the monthly payment. It is all relative.

All of us, as consumers, form a price in our head for a good or service that serves as a baseline. It can change over time, but it acts as an anchor. The baseline for me in the above example is not the 2002 selling price of $220,000. The anchor for me is $339,069, the approximate selling price in 2010 (when I moved into the neighborhood), which matched very closely what it should have been, if based on annual inflation.

*You will note, that the current asking price for the house dropped $14,000 from the beginning of the post. That is because - when I checked my facts - THE HOUSE WAS RELISTED!


It is not my house, I am not buying or selling. I’m just living nearby…

A wise man once told me that something is “worth” what somebody is willing to pay for it.

In this market, most houses are worth-less.

In this present crisis, I am currently in a losing position, and I am asking the government....please...don't help! We Regret To Inform You...

..that my computer is dying.  Slowly.  I've never seen one hang on to life like this.  Usually its *BLANK*, and they're gone.  This one, seriously, has been moaning and grinding down for weeks.  It was running really slow, not just the Internet, but to open a program would take 10 seconds (like in the old days, not the real old days, but like the 90's - which wasn't so bad, since my wife and I dress like its still the 90's) and then several times shut down, and would not reboot..."Hard Drive Failure" or "No Hard Drive Detected".  I got it back to life, and removed all medications (Mcaffee, Norton and Kapersky - all not up to date).  That seemed to help, it ran WAY faster (duh!) and seemed to be okay.
I quickly updated all my backups on an external hard drive (taxes are done, but not printed or sent!)...
Then it shut down again..."Hard Drive Failure."  I let it rest, told the kids to be quiet, and then, turned it on again.  Bingo, like nothing happened.  It was like the old computer was back, couldn't hear the humming and spinning like since the last crash.  I thought we would be together for years...its been 4.
But its only a matter of time...

That is the State Motto that New Hampshire is now considering.


New Hampshire's current motto is "Live Free or Die," but it isn't holding up.  Chosen as the State Motto in 1945 (possibly based on the fact that the United States had just finished leading the world towards freedom), it comes from Revolutionary War General John Stark, who was one of the last living Generals of the war.  Stark was invited to attend a commemoration, but due to his age he could not travel, so he replied in writing, closing with "Live Free or Die: Death is not the worst of evils." 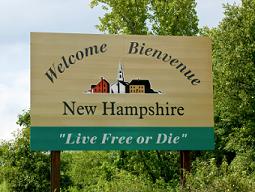 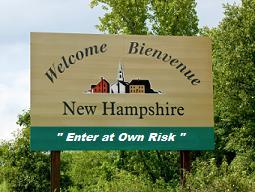 "The single grandfather had returned home to find that his home had been burglarized and spotted Joseph Hebert, 27, climbing out of a window at a neighbor's home. Fleming said he yelled "Freeze!" before firing his gun into the ground, then held Hebert at gunpoint until police arrived.  "I didn't think I could handle this guy physically, so I fired into the ground."
No one was injured in the incident, but when the police arrived, they made two arrests. Hebert was charged with two counts of burglary and drug possession. He faces up to seven years in prison if convicted. Fleming, meanwhile, is scheduled to be arraigned March 20 on a charge of reckless conduct, which could potentially land him a sentence similar to the one Hebert faces."

General Stark is buried at State Park in Manchester, New Hampshire, passers by recently reported hearing what they thought was thunder on a cloudless day.  It may have been Stark rolling over in his grave...

Between Barack and a Hard Place...


Okay, that was out of context, but it was the bottom line of what he was saying...


In the clip below, Ryan quotes Geithner admitting that there is a better way to do tax reform than what is proposed in the budget, by "lowering rates and broadening the tax base," then Ryan shows evidence that not only does this increase revenue to the government, and (can) simplify the system, but the 'rich' end up paying a HIGHER SHARE OF THE TAX BURDEN!  So why does the left oppose this?  Because they don't understand it.  Listen to the end, Geithner admits they haven't proposed what he suggests in FOUR years:


...oh, and by-the-way, today I'm going to a large American city, to the offices of Immigration and Customs Enforcement.  Wish me luck...
Posted by Race Bannon at 7:22 AM 2 comments:

Whose Side are They on...

Separation of Church and...

What's Good for the Gander...

...shouldn't be forced on the goose, if the goose is a millionaire lefty.

In FOXNews's (pinko commie rag) ongoing exposure of leftist Media Matters' ("...dedicated to comprehensively monitoring, analyzing, and correcting conservative misinformation in the U.S. media.") organized plan to attack FOXNews - they have revealed that the anti-gun organization's founder David Brock, has had armed guards, including in Washington D.C.

Était il pas Rosie O'Donnell...sorry...wasn't it Rosie O'Donnell, who, after attacking Tom Selleck about his work with the NRA, was found to support her bodyguards being armed?

Some things never change...
Posted by Race Bannon at 8:24 AM 2 comments:

The History Channel is beginning the 4th season of their show Top Shot.  It is a reality show for shooters...of everything. Pistols, rifles, bows, knives, spears, etc.  But mostly pistols and rifles.  They try to add drama for the show, but most of the shooters are either former military, law enforcement, or competitive shooters - who seem to be normal people.  The Bannon family loves the show, and it would be better without the added 'drama.'  The winner usually ends up being a good guy, and a great shooter.

In June, or July of 1947, reports came of an alien spacecraft crashing outside of Roswell, New Mexico.  In September of that year, Congress passed the National Security Act of 1947, and created the United States Air Force.

It is a well documented Hollywood fact, that aliens to this world often take the name "John" along with a last name, that, well, sometimes sounds completely random...like Yaya, Smallberries...or Denver!

Where are the stars of the Conservative movement?


Peter van Uhm, Chief of Defence The Netherlands, has an outstanding track record in his field since joining the army in the early ’70s. However, most people will know him from his personal tragedy. On 18 April 2008, one day after Van Uhm was appointed Chief Defence Staff, his son First Lieutenant Dennis van Uhm was killed in a roadside bombing in Uruzgan. Van Uhm’s incredibly dignified and human response has astounded many.
Posted by Race Bannon at 7:44 AM 2 comments:

No Sweat for the Sweater Vest...

...in today's America, is a behavioral problem.

Today's CROSSFIT WOD (Workout of the Day) is
"Rahoi"

Complete as many rounds as possible in 12 minutes of:

That's the answer! Charge the banks! Banks are big and mean, and they have alot of money that isn't even theirs!  This is a President that understands!  Next he should propose the "Anti-Greed Act", or the "Equalization of Opportunity Act", or the "Anti Dog-Eat-Dog Act"...

"No more red tape. No more runaround from the banks. And a small fee on the largest financial institutions will make sure that it doesn't add to our deficit," Obama said of his plan.

Mr. Thompson will be played in real life by Barack Obama...


"Now that our new consumer watchdog financial agency is running at full steam, now that Richard Cordray is in as the director of the Consumer Finance Protection Bureau, they're moving forward on protections like this," [Obama] said.

Wesley Mouch will be played in real life by Richard Cordray...

"It is wrong for anybody to suggest that the only option for struggling, responsible homeowners is to sit and wait for the housing market to hit bottom," Obama said in a subtle jab at Mitt Romney, who has suggested the market should be allowed to run its course.

...wait, does that mean Romney is Hank Reardon!?
Posted by Race Bannon at 3:31 PM No comments: