Against All Enemies, Foreign and Domestic...

A well regulated militia being necessary to the security of a free state, the right of the people to keep and bear arms shall not be infringed. 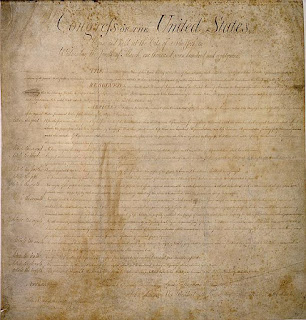 They were not talking about hunting rifles, or pistols, or limited capacity non-pistol grip replicas.  They were saying that the citizens have the RIGHT to KEEP and BEAR the same weapons that a military would have.

From the Preamble to the Bill of Rights:  "The Conventions of a number of the States, having at the time of their adopting the Constitution, expressed a desire, in order to prevent misconstruction or abuse of its powers, that further declaratory and restrictive clauses should be added:  And as extending the ground of public confidence in the Government, will best ensure the beneficent ends of its institution."

...in order to prevent misconstruction or abuse of its powers...

So they made it nice and simple.

...and it is required, that the President, Congress, members of the Military...and Federal Law Enforcement Officers, swear an oath to protect and defend it.

The English Common Law definition of felon held that the only thing that bound men together were their oaths. Even though today an oath is not considered sacred in the slightest, it has not always been like this.

An oath of fealty was required to obtain a fief. A felony was the in which a man gives up his fief, or his office. In common law it stretched to a number of serious crimes that men were bound by their creator not to commit (malum in se). The penalty for a breach of fealty was usually death.

The regulations set down by the king outside of fealty were usually prohibited (malum prohibitum) and were punished with a far lighter sentence - a misdemeanor.

The oath that American's take when they serve under the standard in any capacity that requires an oath of office has NO EXPIRATION DATE. Odd, isn't it? And not by accident, I think. It was designed to bind men of principle and value to the nation, to protect it's core.

The founding fathers knew that politics attracted slime. It always has. It always will. So they too were bound by oath and by fealty to support and defend the CONSTITUTION (not to support men of high office) and to follow the law. And if they didn't, then they were felons.

I don't think that this concept has been drilled into lawyer's heads for hundreds of years, but they were once and sadly for the scoundrels, the law is still the law.

Going to James Madison's notes when he wrote the Bill of Rights, the second amendment is clear and unambiguous. The people have the right to equal stature to the military to protect themselves from government. It was not a clause to permit hunting.

And when I go into a sporting goods store and see the ammunition and firearms picked clean and people stocking up on compound bows, arrows and razor broadheads, I realize that they are doing so not because deer season is only 9 months away. They are afraid of the government.

And none of this Obama bullshit was necessary. None of those people arming themselves are criminals. The majority of those people who are spending their treasure on arms are AFRAID (or at the least, very wary) of their government. The government has sunk to that level that it now causes every single weapon to be sucked up by the public that it is sworn to protect.

In their hearts, they know that those who presently rule are felons.

The citizens should be armed equally as it's government and bad guys.

Oh dear, I aways thought it meant bare arms. Silly me. All kidding aside, I agree with both Odie and LL. It is a scary government we live with.