How Can Someone So Smart... 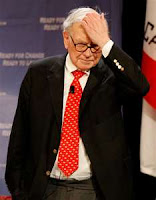 I give you Warren Buffet.
I have never admired Mr. Buffet, except for his personal frugality.  As frugal as a billionaire can be.
Now, thankfully, Obama has jumped on Buffet's claim that Buffet's secretary pays more taxes than he does.  Thankfully, it is getting alot of press that it simply isn't true.  She pays a higher INCOME TAX RATE, because Buffet owns everything - he doesn't collect a PAYCHECK, which is what is taxed in INCOME TAX.
Obama and the Democrats are doing what the Democrats historically do.  Ignore history.
The Buffet rule or whatever they are calling it - is an effort to get the ultra-rich to pay more taxes.  Uh...we have tried that, its called the Alternative Minimum Tax.

It didn't work the first time, and its been NOT WORKING for 42 years.  And worse - members of both parties campaign against it, claiming to want to get rid of it - but they don't.  They can't.  Once they create it, they think its an institution, and that they have to alter it.

[ Many Republicans said the same thing about Obamacare - "Well they passed it, so you can't just get rid of it"...what happened to YES WE CAN?

"Government programs, once launched, never disappear. Actually, a government bureau is the nearest thing to eternal life we'll ever see on this earth!" - Ronald Reagan]

These are the same people (including many Republicans) who try to fight "sending jobs overseas."  Jobs go overseas, when it is less expensive to do so.  Where does Obama think the money millionaires and billionaires have will go - when he tries to take it?
Posted by Race Bannon at 6:51 AM

Capital is fluid. It's just as easy to put funds in a company in one country as it is another, or to start a new company somewhere outside of the US. I do understand that ownership needs to be declared to the IRS, but there are loopholes, nominee investment, etc. that eliminates that troublesome problem.

California (for example) boasts the highest tax rate in the nation and companies who can leave are doing so in droves - meaning that California will collect less taxes and will need to continue to raise the rates on those who remain in order to feed the Socialist engine.

The Lion King (Cartoon) is instructive. What happens when the jackals take control of the kingdom? It's a metaphor, but we see it happening in front of us.

Are jackals synonymous with jackasses? MMM food for thought.