Part of the Problem...

"My thoughts are with him and his wife and their kids tonight," said John Boehner. EXACTLY! Boehner acts as if somebody died? They treat their elected representative position as if its part of their

family, and theirs to keep!

I'm not really anti-Cantor (although I would find it hard to vote for a guy with that voice), but I love the idea of throwing them out - even ones that I like, if they are there too long.

And then there's this:

Eric Cantor has long been the face of House Republican's extreme policies, debilitating disfunction and manufactured crises.  Tonight is a major victory for the tea party as they yet again pull the Republican Party further to the radical right," said House Minority Leader Nancy Pelosi.

How can this buffoon say in one sentence that Cantor is the problem, he is extreme, and then welcome his loss as a Republican pull to the Right?  Nance, it was the Tea Party that tossed you out and made you "Minority" leader. 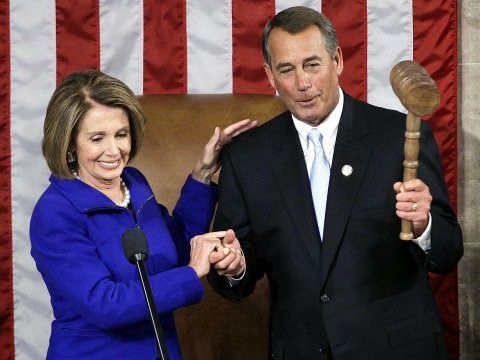 It would be nice to see a "toss them all out" campaign.  Some think it can't be done, that we need some senior people there.  That is a joke, and our current economic status, bureaucracy and elected largess is the punchline…

Cantor is a career politician who has never held a "straight" job in his life. Thus, it would be good for him to go out and find work. HAHA, well that won't happen. He's going to move into a cushy Republican sinecure or into a big lobbying group.

The Democrats need to ask themselves why the voters found it necessary to move to the "right" of Cantor.

I love how the DNC used this primary election to fear monger about the evils of the Tea Party. Talk about shaking up the establishment.

Now if we could replace Boehner. And Reid. Especially Reid.

Amnesty is the "pill" the American people are having a hard time swallowing. Congress had better wake up and seal that Mexican Frontier we call a border.