...I know it is supposed to be Washington and Lincoln.  But they get a lot of celebration.  Today I will be celebrating Calvin Coolidge.

Coolidge was all about the limits of the Federal Government.  He lowered income taxes, and lowered spending...and whadda-ya-know, 1/4 of the federal debt was retired.  He opposed farm subsidies, instead believing that business worth being - should stand on their own.  Like alot of Republicans (conservatives) he got little credit for his work on civil rights - granting citizenship to Native Americans (ironic) and appointing blacks to high positions.

Silent Cal was elected as Vice President in 1920 (with Harding as President) as a rebuff of all the progressive nonsense that Wilson brought.  After Harding died, Coolidge won on his own in 1924 - with almost double the amount of votes of the Democrat. 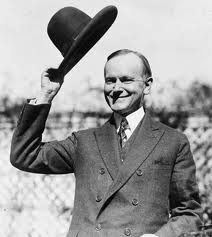 They just don't make'em like that anymore...
Posted by Race Bannon at 1:27 AM

It's not as though the secret to prosperity is a closely held. It's linked to personal profit, which is spread through society despite what the socialists claim. Government is a necessary evil, not the be-all and end-all. Things do need to be "made regular" (regulation) and orderly, but not too regular and not too orderly. Finding that balance was the genius of the Founding Fathers.

I disliked History as a student, I think half the nuns did as well becuase they didn't make it very interesting. I think you would have made an excellent history teacher. I know you make a very good tour guide. OK so I'm your mother but "mother's know best." Thanks for the history lesson.

BTW what happened to the music? I liked that last one you were playing.

The music goes when I have a video...you old folks get confused.

Teaching History would be a dream job...but I already have one of those.