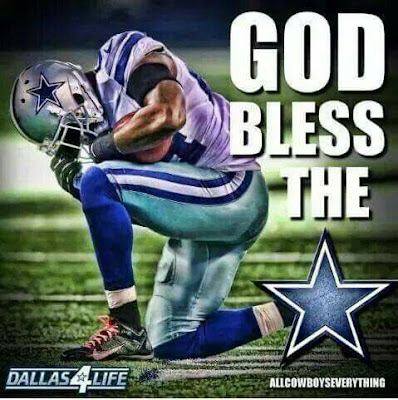 Green Bay is out-playing the Cowboys. I'm sorry to say it, but that's how it looks. There is still a lot of game left to play but Texas has to bring it or face the consequences, and they aren't pretty.

Good drive Green Bay. Where is the Cowboy's defense? Where's their offense?

I hope you don't have a lot of money on the game, Race. Cowboys are favored by 4.5. Green Bay and the odds look better here toward the end of the first half.

I thought that the Cowboys would have emerged from half time with fire in their bellies but Rogers led a pretty spectacular drive right out of the gate.

I lied - more commentary - tied up, gonna be close.

Get that mojo working, Race.

Not quite enough mojo.

That was brutal. I am glad they came back though - it makes it less painful.

...I don't know if the Super Bowl champ will be "legit" though, I mean, a majority of Americans prefer America's Team...

You need to lead a movement to de-legitimize the Super Bowl victory for that very reason.

Count Hope and I as disappointed fans!