Who would have thought, that on the anniversary of 9/11, attacks on U.S. Embassy's in several Muslim countries...would be met first with an apology from the U.S., and then more soft talk from the President of the United States.  We are living in interesting times.

Our Ambassador is dead, our Embassy in Libya is destroyed (did they have time to secure things that needed to be secured, or does the Muslim now Brotherhood have our computers, our plans, etc?), and the Main Stream Media is most concerned that the man trying to be President, spoke before the President.

On 60 minutes on Sunday, President Obama will say that Mr. Romney has a problem speaking before he has all the facts (see "Beer Summit").  When in fact, Mr. Romney was correct in his words, and correct to say "its never to early" to condemn attacks on Americans. 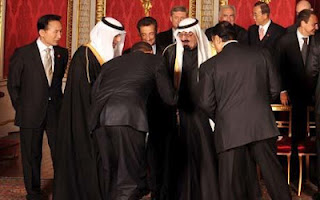 Mr. President, they would not have dared to do this (or what comes next...) if they knew it was dangerous to do so.  Mr. President, didn't you see all that Bin Laden did in the 90's?  Don't you see that the governments of Libya, Egypt and the rest of the Middle East will see how you want them to treat our Embassies?

Years from now, will the books (eBooks?) tell about President Apology and how his ethnocentric view of the world cost the lives of Americans?  Worse yet, the story is not completely written.  When the Marines arrive, will they have food and money for Brotherhood, or will they have the dangerous end of an M16?

...it is slowly becoming clear (where is the MSM on this?).  The Internet movie that nobody heard about, was a hoax, and a ruse.  The citizens of Libya, Yemen and Egypt did not, on 9/11, all of a sudden get upset over a movie no American ever heard of, and decide to protest the American Embassies.  The Islamists coordinated this, just like they did on THE 9/11.  There is even conspiracy talk that the Coptic Christians of Egypt funded this to get America involved in their war, since it is the SAME enemy.  Either way, it boils down to the simple fact that we were attacked again, and again the wrong man is at the helm of our Ship of State. The only reason their attack is so small, is because we beat the hell out of them around the globe the last time...

I hope you'll have a new commander-in-chief soon. If not, we're in for a far more wild ride than we had over the past four years.

Maybe I need to consider relocating to Mexico...

Just went to 2016 last night...hope they come out with the dvd before the election. All night I was dreaming (nightmares actually) about Obama, and I kept waking up with a picture of Chris Stevens unconscious and black and blue in my mind. We have GOT to get this right in November.

Pray that God will bless America again with an honest leadership "for the people" of America.