Department of Justice Sues Gallup Polling Regarding Over Billing

NBC was sure to print that story...but they forgot to print this one:

"Internal emails between senior officials at The Gallup Organization, obtained by The Daily Caller, show senior Obama campaign adviser David Axelrod attempting to subtly intimidate the respected polling firm when its numbers were unfavorable to the president."

But that isn't all...this DEPARTMENT OF JUSTICE claim may be Furious, just not Fast:

"The publicly available complaint shows the DOJ is relying solely on the allegations Lindley (former Gallup employee) is making to back its claims...."

"...They have 120 days to serve a complaint on us — so they might just hold off on service until the election passes,” the senior Gallup official said. “That way they prevent us from officially responding to their allegations, which might be damaging to the campaign.”

Holder spokeswoman Tracy Schmaler did not respond when asked by TheDC why the Justice Department has not yet served the complaint to Gallup." 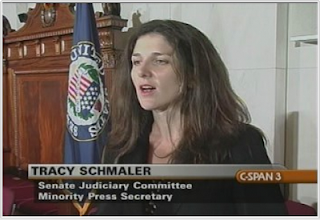 Holder spokeswoman Tracy Schmaler - you mean the one who has been working with Media Matters to make sure the TAX EXEMPT outfit gets 'facts'? Wonder why she hasn't responded?
Posted by Race Bannon at 7:58 AM

This is truly shocking - of all people, some fuzzy, cute little guy like Axelrod threatening somebody? Rahm is gone, so I guess that they need a thug with DOJ's backing to get things done in the Obama Campaign.

It's interesting how they use the government (DOJ) as a tool to further the Imperial Presidency.

Sounds awful close to the legal definition of extortion. Notice how the DoJ has recently been quietly dropping cases? Perhaps the lawyers with their names on the line didn't weren't eager to face disciplinary hearings or something?

I have some personal experience with Schmaler - she, if you may have guessed, is not like, even within the DOJ inner circle at the top. I would describer her as, willing to do whatever it takes, compromising national security, for minor political victories. I only say this, because I had to deal with her, while she COMPROMISED NATIONAL SECURITY for minor political victories. Luckily, Race has played the game before, and Justice won...