I was not a Romney guy.  In fact, none of my top five even ran.  But, I recognize that some in my top five, might not have even won the nomination, let alone beat President Kardashian. 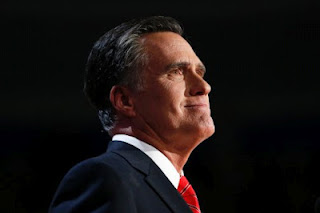 I knew Mitt Romney was successful, and I believed he would do a good job.  As a libertarian leaning conservative, I was concerned that he wasn't ideologically a conservative, and that when he was, it was because he was a realist - and conservative ideas work.

Then I watched the convention.  I almost watched the entire thing, flipping from CSPAN to MSNBC to see what the Socialists were saying, and when I couldn't take it any longer, I flipped to Fox Business News, then back to CSPAN.

I was impressed with the way the speeches lined up.  There were some duds (hello Mitch McConnell).  But the stars did come out...Rand Paul, Nikki Haley, Chris Christie, Artur Davis, Mia Love, Susana Martinez, Condoleezza Rice, Marco Rubio and Paul Ryan.

They were all great speeches.  I knew nothing about Susana Martinez or Mia Love - what great arguments they made for America, and for the Republican party!  Chris Christie is not a conservative, but he is doing a good job in a tough state - something maybe nobody else could do. Condoleezza Rice came out of her shell - and the sky is the limit for her.  After Ryan's speech, Socialist Lawrence O'Donnell (a hate spewer paid heavily by NBC) said he actually feared for the Democrat's chances.

And then came Mitt.  Even my little sister was not excited to hear the nominee, and feared he would be 'plastic,' and that he would be anticlimactic after Rubio.  I was afraid too.

The way the convention speakers led up to him, the way they did the 'this is your life Mitt' earlier in the evening, "introducing us to the real Mitt,"...it worked.  Mitt Romney is a great man, and has a chance, if elected, to be a great President.  He gave a great speech. After his speech, I felt optimistic about the election for the first time in a long time.

The election will be about the economy, stupid.  So while the Dem's forget this (and try to get the electorate to), the Republicans need to stay focused.  But its not just the facts, and the economics, and the finances - it is about the fundamental cause of the problems with our economy, the vision and actions of our leaders, who always seem to forget what made America the exception.

...and that, is what Romney and Co. were talking about all last week.

"Dreams from my Father" was Obama's journey with an eye toward his father's communist vision. It was never an American vision -- Daddy Obama was from Kenya and he was a scammer and whore chaser who lived for 'the free ride'.

That's not the Romney/Ryan vision and I'm with you, they will do a great job.

it's the plastic hair. i just can't get past it.

p.s. I may be 70 lbs lighter than you, but I have three years on you, little bro.

C-span was the only way to go. I gave up listening to the talking heads years ago.