The article describes the results of the multi-day search across several states and into the forests of Idaho for a 40 year old man who had kidnapped a 15 year old girl, after he murdered her mother with a crow bar and burned her 8 year old brother to death. 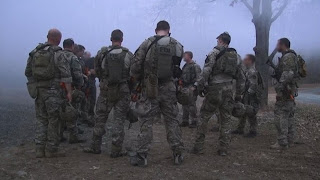 200 law enforcement officers went into the forest, risking their lives, to rescue the girl.  All you have to do is imagine yourself walking through the woods, trying to find DiMaggio and see him before he sees you.  It ain't easy.  Now imagine that there are 8 to 12 FBI "tactical agents" closing in on his location...and he shoots at them from a rifle (the article says that authorities declined to say if DiMaggio fired the first shot) and that DiMaggio was shot 5 times.

Why couldn't the title of the article read, "FBI Shows Great Restraint, Murderer Shot Only Five Times"?  Because the opinion of the article, and the LA Times, is that he should (or could) have been taken alive, or only shot once...or they could have shot the gun out of his hands.  8 to 12 agents with rifles, probably only a few were in position in the woods to see him and take a shot - I'm gonna bet there were more than double that many shots fired, only that he was hit 5 times.


Finally, an End to the War on Drugs

Libertarians and Lefties unite!  I'm tired of hearing the misuse of that phrase from the 1980s.  "Billions spent every year combating the flow of drugs that can't be stopped, and needlessly filling our prisons with lowly drug offenders."  How much have we spent to stop traffic fatalities? Trillions upon trillions - and 45,000 to 50,000 people die in car crashes each year.  STOP THE WAR ON TRAFFIC ACCIDENT DEATHS!  I can stop all the traffic deaths with one law.  Driving vehicles is against the law.  There, done.

If we stop the "war on drugs" how many deaths a year will we have from overdoses, vehicle accidents (how many drunk and drugged drivers kill people when it is illegal?), and industrial accidents?

The article mentions Attorney General Holder's comment that the United States Attorneys will be directed to avoid prosecuting drug criminals under statutes with mandatory minimum sentences who 'are not linked to violence, or to a larger criminal organization.'  Even if one knows nothing about the federal criminal justice system, isn't it widely known that criminals can plea bargain down to minimal sentences by pleading guilty and "cooperating."  The only thing Holder is doing is taking that bargaining power away from his own prosecutors.  The case mentioned in the article makes it seem like an abused girlfriend with no criminal history was sentenced to 25 years because she was forced to carry drug money for her boyfriend.  I will keep it short, and say: Somebody watches too much television.

Our prisons are full of people who were convicted of crimes, and those people knew it was a crime when they did it.  Lets stop pretending these are political prisoners and call them what they are.

Coroner - I'll bet that one blast from a 12 gauge shotgun firing 9 OO buck pellets (or 12 00 buck pellets if it's a magnum load), hitting the subject ONCE would be counted as "being shot 5 times" if roughly half the pellets struck.

Reporters don't do -- they whine and opine.

As to ending the war on drugs (a domestic contingency operation), you are becoming suspiciously un-progressive in your approach to the problem.