Just Holder On a Minute 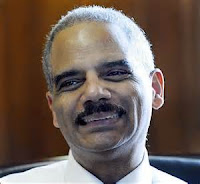 In response to Attorney General Eric Holder's announcement that he will direct the Department of Justice to avoid "indiscriminate" federal charging of individuals who are NOT connected with drug cartels or 'larger organizations,' or violent gangs - there is word that the FBI released a directive: This changes nothing, since we don't do that anyway.

I could be wrong, though. The lead agency on drug crimes in the Federal Government is the DEA...

But I'm not, wrong.  Even if the DEA (or ATF, or ICE, or USSS) brought a case on an individual that did not fit the criteria Holder is describing - I believe they would be hard pressed to find a United States Attorney to prosecute it.

The US Attorney's offices all (depending on district) have different charging guidelines and thresholds based on a number of criteria. Does the "Holder Doctrine" change those guidelines in any fundamental way across the ENTIRE system?

It REALLY doesn't matter what FBI/DEA/ATF/ICE, etc. does by way of enforcement if the AUSA's won't file the cases --- which is what you're saying here.

Holder has his head so far up that he needs a glass belly button to see out.