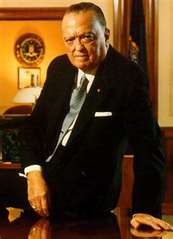 And what of that legend.  Of course I didn't know Mr. Hoover (I'm quite young you know).  But I grew up in an era where the FBI was renowned for its ability to fight crime.  Mr. Hoover was responsible for that.  He not only developed the FBI, but extended great effort to portray the FBI and its Special Agents as the epitome of professionalism.  The effects of his efforts in that area felt today, not always in ways you might appreciate . . . but the bad guys do.


(The shooting between the legs technique can come in quite handy...)


Though Mr. Hoover tried to portray himself, and the Bureau, as perfect, he wasn't. History has shown us.  However, to take Mr. Hoover out of the time frame he lived, and give him characteristics of today's society, is an injustice in itself.

Mr. Hoover collected information on individuals, in a way, and using techniques, that was not against the law at the time.  He gathered physical evidence of the philandering of Dr. Martin Luther King Jr., of President John F. Kennedy, and others.  We know today that MLKs family was subjected to the evidence, for probably less-than-righteous reasons.  But has the public been subjected?  What is MLK's reputation today?  What about JFK?

I would hope that this lie about Mr. Hoover (a result of his percievd blackmail efforts of others), would die off over time, as the truths of the covert, and private, activities of MLK and JFK would die off too.  But Hollywood has seen to it, that that not be the case...

Like I said, Mr. Hoover was not perfect, but I do appreciate what he created, and the ideals he stood for.

Retired FBI Employee Who Helped Crew in “J. Edgar” Reflects on Movie and Power of Hollywood

"...The film also documents Hoover’s rise in the Department of Justice as well as the political turmoil faced by the nation in the early twentieth century. The film credits Hoover for his meticulous attention to detail as well as some of the innovations that he introduced to American law enforcement.

What I found less satisfying was the portrayal of Hoover and Tolson’s personal relationship. Mr. Hoover and Mr. Tolson were certainly close. When I first started at the Bureau, from time to time I would hear colleagues make snide remarks about them. It didn’t happen as much as one might expect though. Perhaps it’s because until relatively recently, women were largely excluded from clubs, schools and other organizations. Also, remember that up until 1973, only guys were drafted into an almost exclusively, all male U.S. military. Over the years, millions and millions of men were compelled to go through this male rite of passage...

...As for their living arrangements, Mr. Tolson lived in an apartment near American University. Mr. Hoover owned a house several miles away. The only time that I am aware of Mr. Tolson ever staying with Mr. Hoover was the time just after he had had open heart surgery. Mr. Hoover had a live-in domestic who could look after Mr. Tolson during his convalescence. Under these circumstances, not allowing Mr. Tolson to stay at his house would have been pretty uncharitable. By the way, Mr. Hoover’s secretary, Miss Gandy, also lived within easy walking distance. There was plenty of help if Mr. Tolson needed it.

Were they more than just good friends? We’ll never know, but of the numerous people I’ve talked to over the years, who really knew them, all have told me that there was nothing more to their relationship than friendship. This, I guess, is why I’m so skeptical of all of this talk about them being secret lovers. I mean why should I accept the notions of those who never knew them, never saw them, never met them, never talked to them and in some cases weren’t even born yet?

If this were a film about a ”fictional” FBI director, in the same way that “Citizen Kane” was a movie about a “fictional” press baron, I wouldn’t be too concerned. This movie, however, deals with real flesh and blood people and just to make sure we know that, they even used the main character’s name for the film’s title. Millions of people will see this movie and will draw conclusions from it. For the record, there is absolutely no credible evidence that J. Edgar Hoover and Clyde A. Tolson were either closeted or openly homosexual. Likewise, while there is a popular notion that Mr. Hoover blackmailed the Kennedys and others over the span of his very long career, I have never seen solid evidence that it actually happened. Indeed, I find it dubious that anyone could intimidate 535 members of Congress and every President from Calvin Coolidge to Richard Nixon for nearly 50 years. This is America and not the Soviet Union. While the film does not come out and say it, it certainly does infer these things about Mr. Hoover. Is it accurate? Is it fair? What impressions will viewers take away with them, not only of Mr. Hoover, but of the thousands of men and women who over the years worked for him, and in some cases sacrificed their lives while serving under his leadership?

Hollywood rightly calls attention to the unchecked power of elected and career government officials. What I sometimes fear they miss, however, is the power of their own industry. They can re-write the entire life of an individual in several languages, and it will be believed, sometimes unquestionably, by a vast worldwide audience. With nothing but the box office or advertisers to serve as a check and balance, the entertainment industry has the ability to demonize or beatify almost anyone they choose. Now that’s power! I wouldn’t want it any other way. Censorship has no place in America. But still, we really place a lot of faith in the entertainment industry, and that puts a very heavy responsibility on their shoulders. What does the Bible tell us? “. . . unto whomsoever much is given, unto him shall be much required.”

I'm looking forward to viewing the film. I'll withhold judgment on Hollyweird in its portrayal until then.

...for those of us still receiving taxpayer funded salaries, we will have to settle for reviews until its available on Redbox.

Hollywood portrayal of real life is always skewed to include the perverse...would you expect anything different from them?